In this lesson, we will build a simple React web app that uses the browser runtime to run a Natural Language Processing Rune.

Setting Up the React App#

Before we begin, we will need to create a new React app using create-react-app and the TypeScript template.

If you are following along in GitPod, you might want to run this in a different folder (e.g. /tmp) so you can use the lesson-4 app as a reference.

Once yarn create has finished, we can add Rune's browser runtime as a dependency.

Due to a bug in @tensorflow/tfjs-tflite's NPM package, we need to do some extra steps if we want to do inference with TensorFlow Lite models.

You should now be able to run yarn start and see the familiar React logo!

You have already spent a couple of lessons writing Runefiles, so we won't be trying anything fancy with this Rune. All it'll do is take some data from a RAW capability and send it straight to a SERIAL output.

We want this Rune to be accessible from the web app so we'll tell rune build to save it to the public/ folder.

Now we've got the project skeleton and a Rune out of the way, let's dive into some React code!

Our goal is to create a UI with a text box, a "Calculate" button, and an area to display the Rune's output. 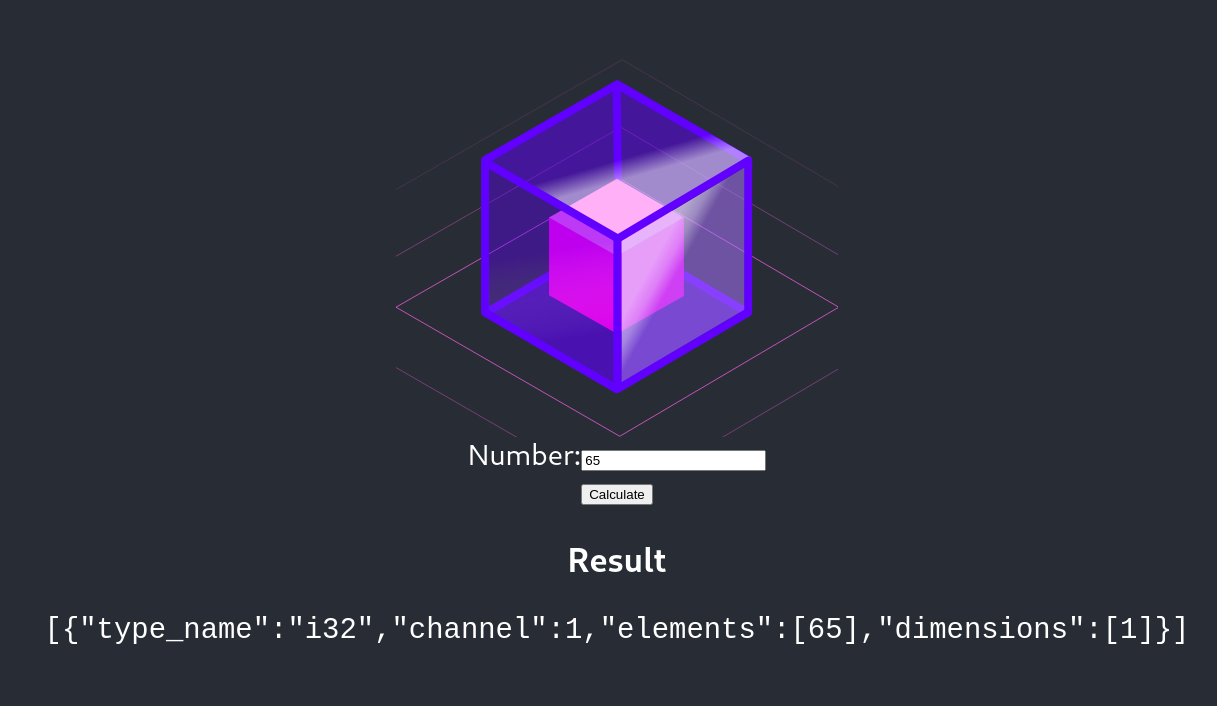 At the very top of the src/App.tsx file we'll need some imports and definitions.

This app won't need any extra components, so we'll put all the state at the top of the App functional component.

Notice that the number has a default value of 65.0. We'll use this when checking our work at the very end.

We can use the useEffect() to make sure the lesson-4.rune is downloaded and the Rune runtime is initialized when the page is first opened. To keep things tidy, all of that logic will be put in an init() function that we'll define in a bit.

We want to run the Rune whenever the user presses "Calculate", so let's define a submit function which will pass the user's input to the Rune and save the outputs to the result. Again, to keep things clean we'll be defining a separate evaluate() function for running the Rune and reading results.

Keep in mind that we'll be loading the runtime on startup so there is a short window when it won't be available. If this happens, the submit handler should just return silently.

We also need to throw in a e.preventDefault() to make sure hitting "Calculate" or pressing <enter> won't cause the page to refresh.

Finally, we have the JSX which defines our UI. For those who have used React before this won't be anything special, but if you are new to React then you may want to check out the official tutorial.

Now we've defined our App component we can come back to the init() function from before. The interesting bit is the builder().build() call - this uses @hotg-ai/rune's high level builder API to configure the Rune runtime before it is loaded.

In our case we aren't changing any of the defaults, but if you want to you can handle any log statements from inside the Rune by passing a callback to the onDebug() method, or you can register your own model handlers with the withModelHandler() method (e.g. to handle models Rune doesn't support out of the box).

We also need to define the evaluate() function from earlier.

The runtime will use our generateInput() function if it wants to read from a capability, using the InputDescription parameter to let you know what type of capability it is (e.g. RAW) and any arguments that were specified in the Runefile.

Normally you would inspect the InputDescriptor and generate the requested data, but because we know this Rune only uses a single capability we can be lazy and return a 1D int32 tensor (note: Rune uses i32 for 32-bit signed integers, while tf.js prefers to call them int32).

If we pull up the browser's developer tools, we can see the messages that were logged as the runtime was loaded and then run.

We can actually double-check the output using the rune CLI. The binary representation of the number 65 is an A followed by 3 null bytes, so we can use the printf command to generate an input.bin file containing exactly those bytes.

From there, it's just a case of running rune run like normal and inspecting the output.

Look at that, they're identical!