In this tutorial we will go from 0-60 on how to build a Rune, run it, serve it, and test it on a mobile app.

There are a variety of installation methods you may use depending on your development environment.

To use Rune you need:

Pre-compiled bundles containing the rune CLI tool and examples are available on our GitHub Releases page as the rune.$target.zip asset, where $target is the target triple corresponding to your OS (e.g. x86_64-apple-darwin for x86 MacOS).

For those who like to live on the bleeding edge, our nightly release contains the same assets but automatically generated from master every 24 hours.

The rune CLI tool can be installed just like a normal Rust tool.

As well as requiring the Rust toolchain, the Rune project uses several native dependencies so you will need to install the following before building:

You can then install the Rune CLI from crates.io:

Alternatively, if you want to live on the bleeding edge you can install it directly from the GitHub repository (either master or a tagged version):

Alternatively, you can use a docker image if you don't want to install the rune CLI on your machine.

The first step of creating a Rune is to find (or train) a Machine Learning Model that matches your application.

Developers embedding Rune in their applications can provide inference backends for any model type they want, but by default Rune comes with support for TensorFlow Lite.

Several pre-trained TensorFlow Lite models are available for download from the TF Hub, so let's head over and download one.

For this application we'll be using an Image Classification model called aiy/vision/classifier/food_V1 which has been trained to detect different foods in an image.

If you scroll down to the "Model Formats" section there is a "TFLite" tab with a download link. 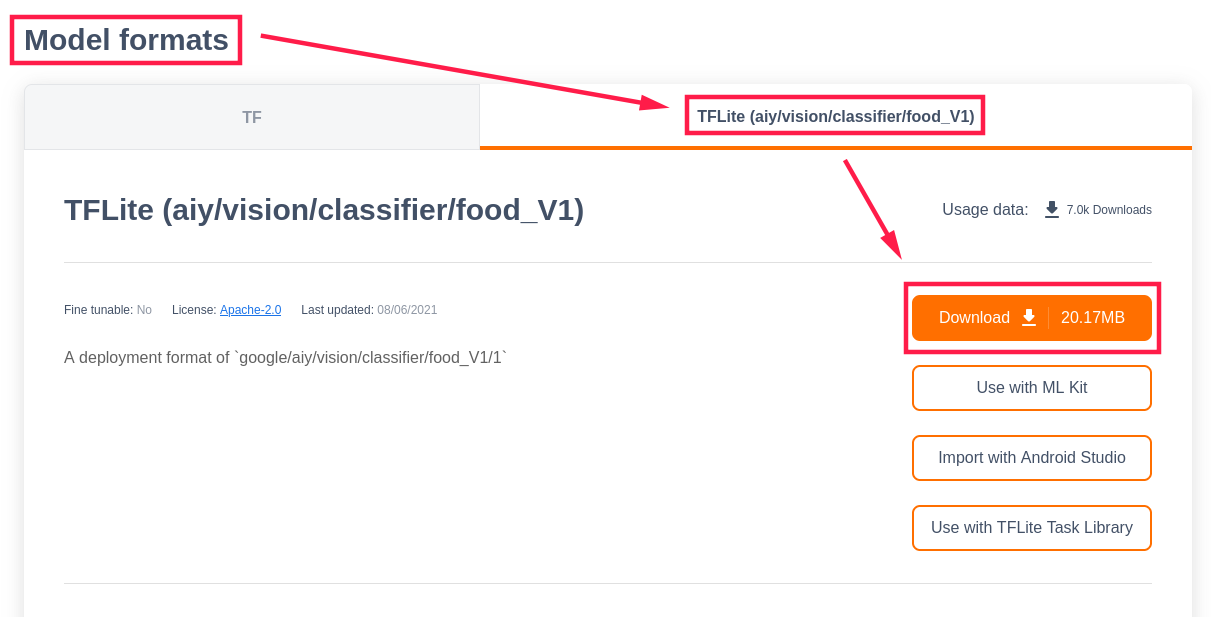 For convenience, let's give the model file a more usable name like food.tflite.

We can use the rune command to inspect food.tflite and see what its inputs and outputs are.

We can see that the input is one 192x192 image which has 8-bit RGB pixels and the output is a 1x2024-element array of unsigned 8-bit integers. Presumably these u8 values are a "confidence" value and there is one for each type of food the model was trained on.

Machine learning is about more than just training models, at some point you will need to read data from the real world, process that raw data into something the model expects, and do some post-processing to turn the model's output into something your application can use.

All of this is done using a Runefile, a special YAML file which rune can use to compile the machine learning pipeline into executable WebAssembly code.

First create a new folder with an empty Runefile.yml and copy food.tflite into it.

Now we can flesh out the Runefile.

This specifies a machine learning pipeline which reads a u8[1, 192, 192, 3] from an IMAGE capability called image, passes it to the food.tflite model which we've named classify, and sends the resulting u8[1, 2024] to a SERIAL output called serial.

The rune graph command makes this a lot easier to visualise: 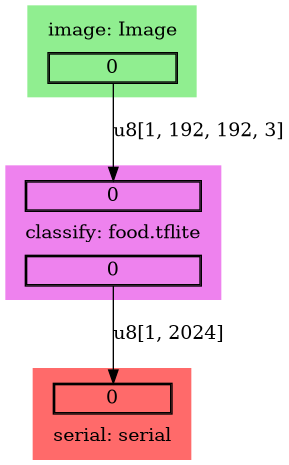 This is a relatively simple linear pipeline, but Rune's ability for abstraction really shines with more complex pipelines like Style Transfer. 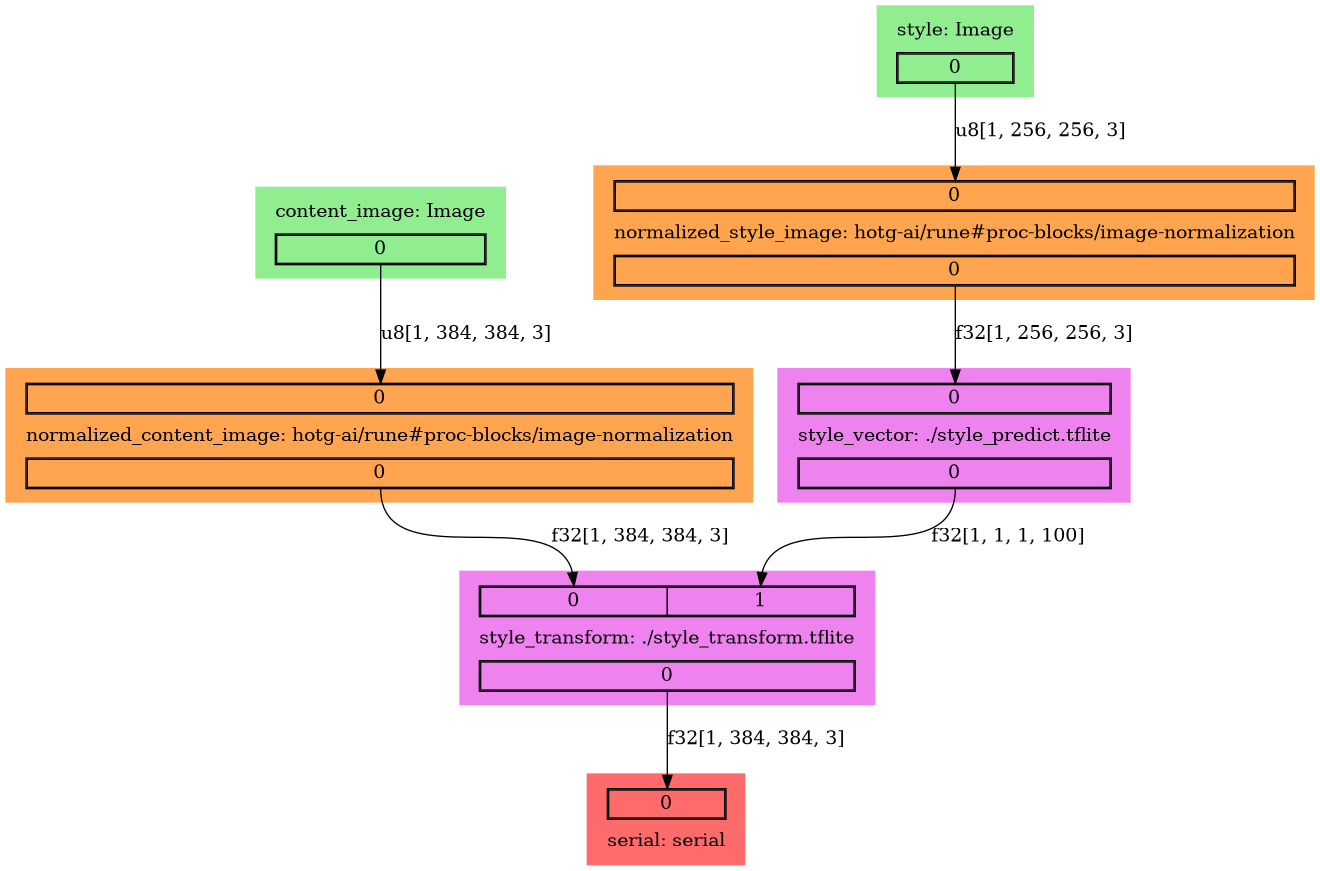 The Style Transfer Rune takes the "style" from one image (e.g. a painting), derives a "style vector" for it, and tries to apply that style to another image.

Imagine having an app on your phone that lets you take a photo and see what it would look as a Van Gogh.

Visit Runefile reference to learn how to write.

Let's take it for a spin#

Ok, so far we have assembled the food.tflite model and have written the initial Runefile.yaml. Let's now compile and test what we have so far.

Follow the docker based command to run the rune. We are calling the rune cli from within docker, and mapping our current directory in docker (‘nix pwd) to the virtual mount in docker. This allows docker to access the current directory containing the Runefile.yaml and helps write the .rune file.

You should see a food.rune file that is created from this file. You can name the Rune whatever you want using the --name argument, but it defaults to the name of the Runefile's directory.

We can use the rune tool to learn more about a compiled Rune. This is useful for knowing what capabilities (inputs provided by the host) will need to be available when running the Rune.

Running the Rune on the terminal is an easy way to check if it is working correctly.

In fact there are many more zeros in the elements (2024 of them!), but we've trimmed it here for display.

You should notice a few things:

As an aside, if you forgot the --image ramen.jpeg you may have been greeted with an error like this:

This says we weren't able to initialize the Rune runtime because no sources were provided for the "IMAGE" capability.

Anyway, our initial smoke test passes so let's do something to clean up this output.

To make sense of the model output we need to process it and make it more human readable.

Looking back at the description on our food model's TensorFlow Hub page, we can see that the model output is a probability vector of dimension 2024, corresponding to a background class and one of 2023 food dishes in the label map.

The page also has a link to download the label map as a CSV.

We can use this list in the Runefile as a the arguments to a "label" processing block.

(Note: We have trimmed the list for display here)

Notice the following change in the YAML file now:

Let's compile and give this a try.

Ok it worked but now it has 2024 elements output and most of them are ,"background" - which is useless for us to check easily.

Lets add another processing block - this time we'll use one that only selects a few top predictions. Fortunately, the Rune repo already contains a most_confident proc bloc we can use.

You should notice the following changes:

Let's compile and give this a try.

Voila! Now we just see 3 outputs and they are all proper labels. It has classified the Ramen as Barbacoa, fried chicken, and spaghetti in this case.

Oh, well looks like the model needs tuning in the future :)

This iterative way of building and testing Rune demonstrates the composable nature of Rune tools making it extremely powerful for machine learning engineers to build and deliver a containerized model. This pipeline on edge is what we call TinyML Ops. This is how we bring production grade tools for testing, repeat builds, and deployment to TinyML.

How about on the phone?#

Runes are magical - we can deploy this rune on a phone using our Rune app sdk (open source as well!) and you will be able to add the ability to run TF Lite models on the phone.

We have built a mobile app that allows you to test your Runes instantly on the app and evaluate how it performs. This ability to deploy runes immediately on the phone for testing is what makes Rune tools so powerful to build tinyML apps for edge devices. It is all about the speed of testing in a production-like environment.

First download the Runic mobile app from the app store.

Next you need to serve the food.rune you just built to be deployed to the phone. In order to do that we are going to use a rune-serve docker image.

This should show a page with QR code in it! You can now scan the QR code using the Runic mobile app to hot load the rune on the phone for testing. 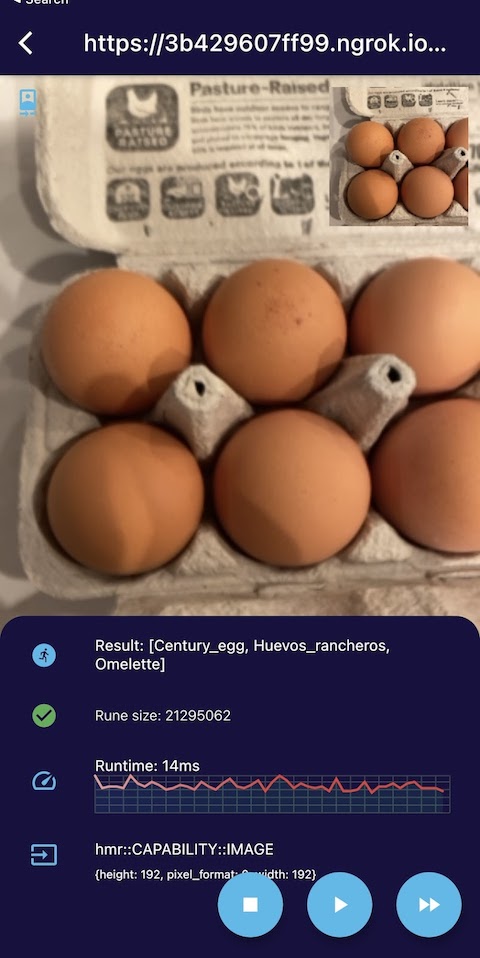 And with that you have an end to end tutorial of how to build, run, test, serve, and evaluate a rune on the phone. The world of tinyML just got the same power and tools of cloud ML.

You can clone our test-runes repo from here - https://github.com/hotg-ai/test-runes. If you go to the image/food directory you will see all the material you need for this demo including:

Runes have much more expressive power which we hope to explain more in details using other sections in this docs. Feel free to reach out to us using the Get Help link page.

The tutorial commands were all using a ‘nix system - Mac intel or linux system. Windows also works but the paths in the command cannot be dynamic. So here is how it can work on windows: